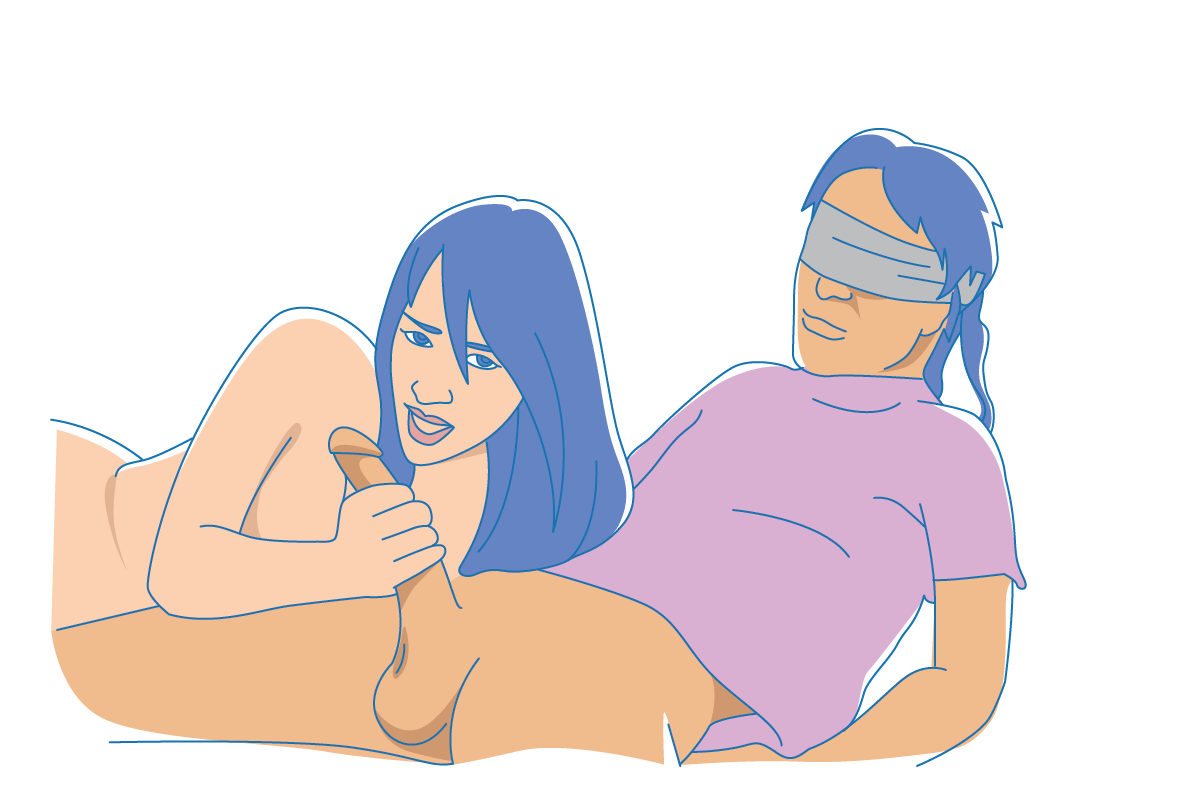 The Complete Guide to the Male Orgasm

There seems to be article after article discussing the mysteries of the female orgasm. It’s beautiful, it’s intense, and it’s too powerful for men to handle.

But what about the male orgasm?

This article will give you an in-depth look at the male orgasm. This includes an overview of the male sexual response cycle, the different types of orgasms a man can have, as well as how to intensify the male orgasm experience. We’ll also cover some common conditions that may impact male sexual relations.

So if you’ve ever wanted to know everything there is about male sexual orgasm and ejaculation, read on.

There are four stages a man will go through during the sexual response cycle.

The excitement stage can last anywhere from a few minutes to a few hours. It begins with physical or mental stimuli which may include kissing, touching, adult entertainment, or fantasizing about sexual acts.

In both sexes, the arousal phase is characterized by an increase in heart rate, an increase in respiration (breathing rate), and a rise in blood pressure.

In males, the excitement phase is further characterized by the hardening of the penis. The penis may harden and soften numerous times throughout this phase. You may also find you don’t always reach 100 percent erection, but that’s okay.

To accommodate the erection, the testicles will usually rise. The scrotum may also tighten as the skin is pulled taut.

This phase continues the excitement of the arousal phase, but there is a more pronounced buildup toward orgasm.

In both men and women, there will continue to be an increase in heart rate, respiration, and blood pressure. You will also begin to experience increased myotonia, or muscle tension. This will be necessary for sexual release later.

During plateau, men will begin to experience rhythmic contractions that begin at the base of the penis. And while you won’t notice it, it’s also at this time that the urethral sphincter closes to prevent urine from mixing with ejaculatory fluids. There may begin to be a release of pre-ejaculatory fluids.

The orgasm phase of the cycle is the peak of pleasure for both men and women.

In men and women, an orgasm is characterized by quick, rhythmic muscle contractions in the lower pelvic muscles. This includes the sexual organs as well as the anus.

While it’s possible to orgasm without ejaculation, male orgasm is commonly associated with ejaculation. Each muscle contraction is accompanied by a stream of male ejaculate which diminishes as the contractions become less intense.

Post-orgasm, it’s time for the body to relax during the phase called resolution.

In men and women, the resolution phase is characterized by muscle relaxation and a decrease in blood pressure. The body will calm itself down to its pre-excitement level.

Did you know it’s possible for men to orgasm without ejaculating? It’s true!

Non-ejaculatory orgasms are possible in otherwise healthy men. These typically occur during multiple orgasms. That is when a male orgasms multiple times in a row with little to no refractory period.

While the first orgasm in the series will typically include ejaculation, subsequent orgasms won’t. This is known as non-ejaculatory multiple orgasms or NEMO.

So what about when a non-ejaculatory orgasm isn’t part of multiple orgasms?

If it happens every once in a while, there’s probably nothing too worrisome, though you should consult with your doctor. If it’s more common than not, it could be due to one of the below conditions:

The Types of Male Orgasms

Perhaps you thought the penis was the only source of the male orgasm. There are multiple areas that, when stimulated just right, can lead to orgasm. 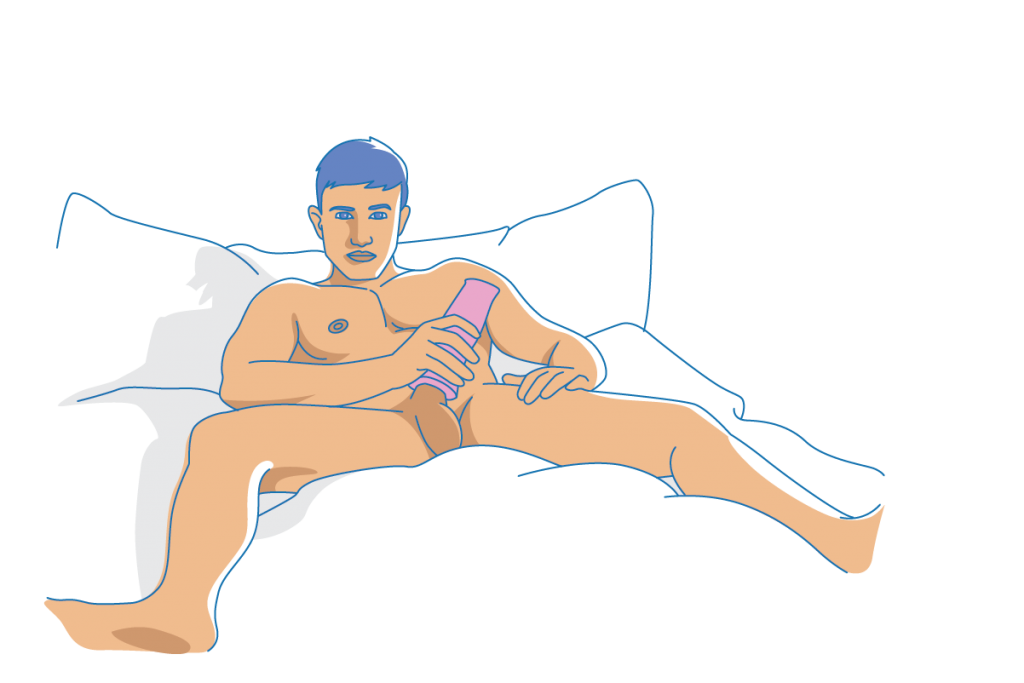 The penis is the most common organ associated with male orgasm. It’s through direct stimulation, either with rubbing or jerking or gripping. 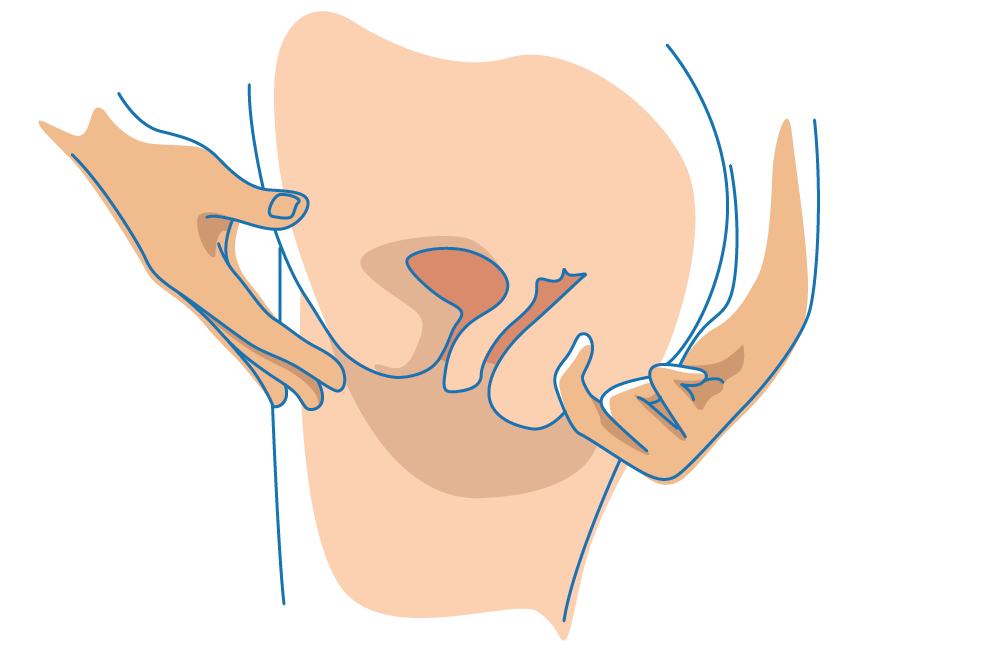 The prostate is a walnut-sized gland that’s located between the penis and the bladder. It can be felt near the front of the rectum. The prostate is responsible for the production of ejaculatory fluids which help deliver sperm during ejaculation.

The nipples in men aren’t often thought of as sexual organs like they are in women. It’s not often that articles and guides on sexual pleasure will tell you to lick, suck, or tweak his nipples during sex. However, the nipples can provide him with strong sexual pleasure, and they can even lead to orgasm.

If you’re a man who wants to try nipple play the next time you’re with your partner, I recommend you do some solo experimentation first to learn what you like. There are lots of ways to stimulate the nipples, and it’s good to get acquainted with each technique.

For example, the nipple can be stimulated with pinches, strokes, twists, licks, and sucks. You just have to find the right combination that works for you to bring you to orgasm.

Beyond the nipple, there are other erogenous zones that can also be stimulated to bring you to climax. In particular, these areas include:

One thing to note is that erogenous zone orgasms can take a combination of high arousal and time. It’s not uncommon to not climax from erogenous zone stimulation the first or even the fifth time. That’s not to say they don’t feel good. Even if you don’t climax directly from erroneous zone stimulation, they can still contribute to your arousal levels and lead to an explosive penile orgasm.

It’s possible to experience more than one of the above orgasms at one time. This can lead to an overwhelming, full-body climax that leaves you feeling satisfied for hours afterward.

The most common combination is penile + prostate. This is because the prostate is very easy to stimulate during various penile activities, either by yourself or your partner. The most important thing for getting them to line up is to work on the less sensitive of the two for longer before you begin to work on the more sensitive one.

It can still take some time and a bit of skill to get the hang of lining up the orgasms to occur together. It just takes clear communication and understanding your partner’s cues.

How to Increase the Intensity of the Male Orgasm

There are techniques you can use to increase the intensity of your or your partner’s orgasm. Here are just a few.

Edging is an orgasm control technique that brings you to the edge of orgasm, only to pull you back before you reach climax. This is done multiple times over and over until an explosive orgasm rocks your body to its core. 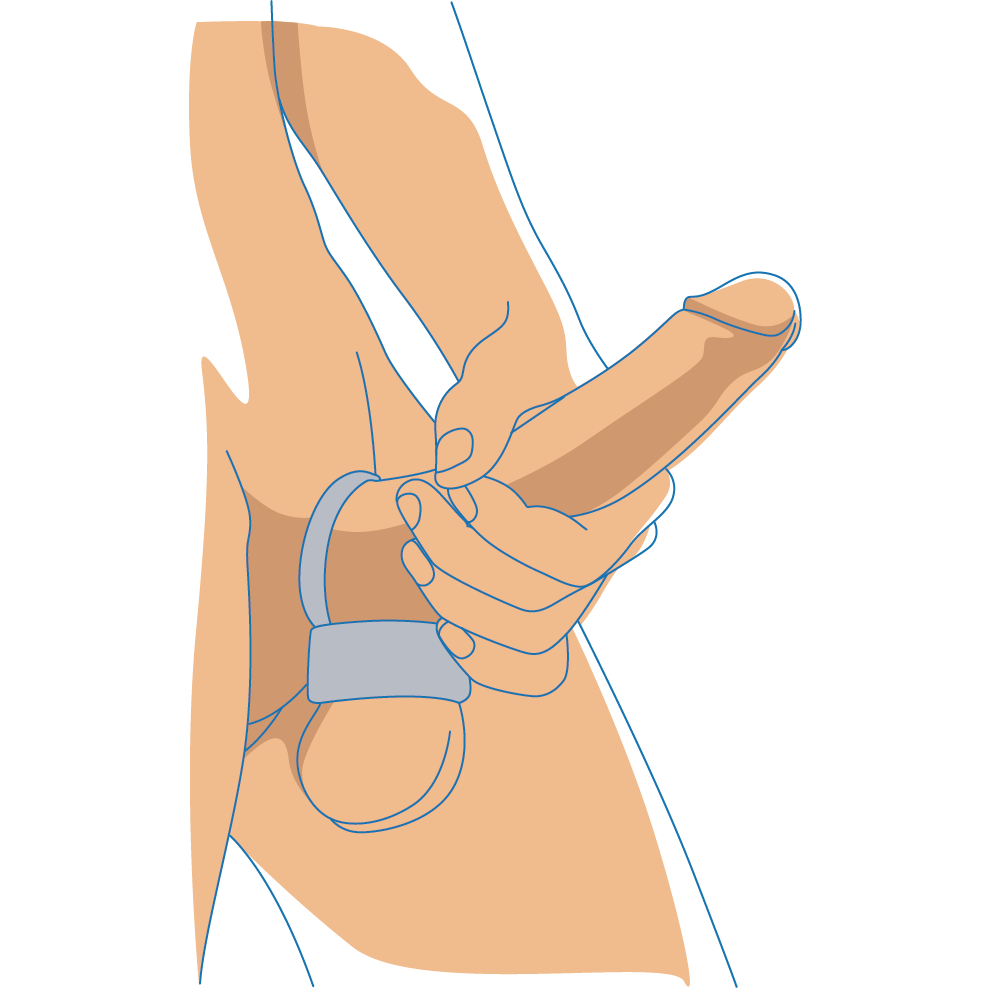 The best way to do this is to change stimulation techniques each time you’re close to climax. It’s easier than stopping entirely, as it’s often too easy to continue for “just a little longer” until you accidentally bring yourself or your partner over the edge.

If you’re practicing this with your partner, it may take some time to learn the best time to switch up techniques. It’s important to get your timing right as just a millisecond too long can lead to an orgasm.

Kegels are exercises that target the pelvic floor muscles. They’re easy to do, and they can be done anywhere at any time.

To do Kegels, clench the same muscles you would clench if you were trying to stop a stream of urine. You may have to practice this while actually urinating a few times to get the hang of it. Hold the muscles for three seconds, release for three seconds, and repeat 10 to 15 times. 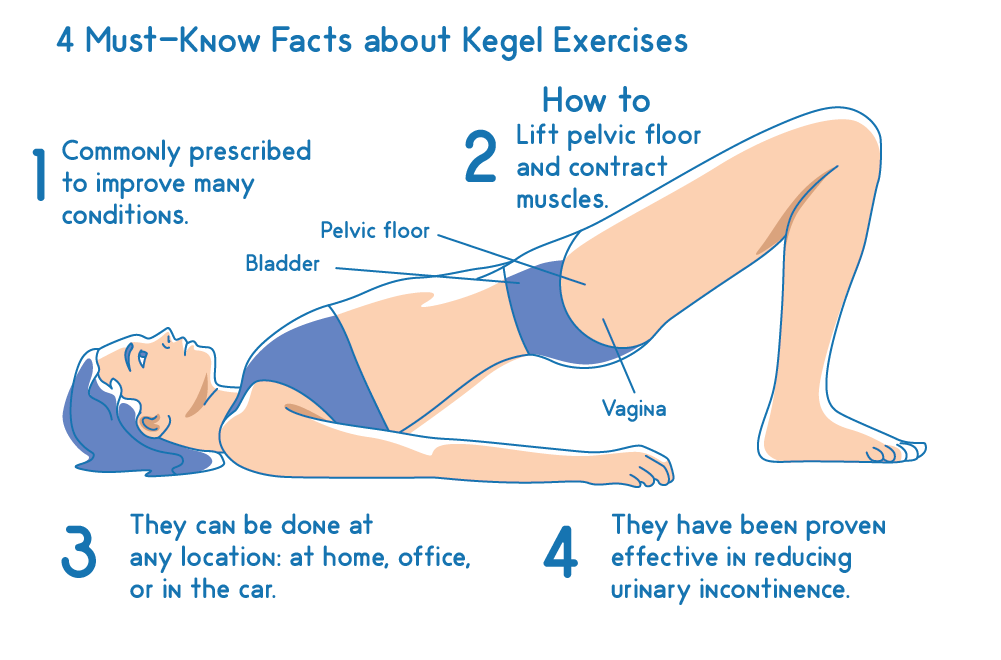 You should do this every day. Eventually, you can even build up the amount of time you hold the muscles for up to 10 seconds.

Relax Your Body During Arousal

It’s not uncommon to clench your muscles during arousal and lead up to orgasm. In fact, it’s a common part of the sexual response cycle. But it’s possible to climax when your body is fully relaxed. In fact, it causes an entirely new orgasm experience.

As you become more aroused, pay attention to your muscles. They instinctively want to clench, but you can fight against that while still maintaining arousal. Now as your build closer and closer to orgasm, purposely focus on relaxing the muscles.

In conjunction with muscle relaxation, deep breathing can help you to more fully relax during arousal, buildup, and orgasm. This can prolong the pleasurable buildup and intensify the orgasm.

As we get aroused and work towards climax, it’s not uncommon for our breathing to become rapid and shallow. But deep breathing can enhance the sexual experience by deepening the intensity of the sensations.

If it helps, think of the deep breaths as drawing the sexual pleasure from your genitals and further out into your body. With each deep breath, the pleasure is spreading to the legs and arms, to the feet and hands, to the toes and fingers.

This will help you to experience a fuller body orgasm as opposed to the genital-focused orgasm that is most common in men.

There are several conditions that can cause dysfunction during sex and orgasm. Here is a brief summary of each.

The condition is characterized by an inability to get or maintain an erection during arousal.

Erectile dysfunction can affect younger men, and the causes vary widely. A few common causes not related to age include:

If you suffer from erectile dysfunction, help is available. Speak with your doctor about your concerns and available treatment options.

We talked briefly about anejaculation, or inability to ejaculate, in a previous section. Another common ejaculatory condition is premature ejaculation.

Unlike anejaculation, a man suffering from premature ejaculation can ejaculate. However, he does so prematurely. This often means ejaculating early in the arousal or plateau phase of the sexual response cycle.

Anejaculation refers to the inability to ejaculate

How can you tell?

After sex, if your urine is cloudy, that’s a good sign you suffer from retrograde ejaculation. That’s because the semen shoots backward into the bladder and remains there until it’s emptied.

When should you seek help?

Retrograde ejaculation isn’t dangerous and it doesn’t require treatment. It can lead to male infertility, though. So if you and your partner are struggling to get pregnant, then speak with your doctor about your concerns.

Anorgasmia, as you may have guessed, is a condition that impacts orgasm. It may be delayed, infrequent, or even altogether absent from sexual encounters. For some men, it can even present as a significantly less-intense orgasm.

The causes for anorgasmia are similar to those of erectile dysfunction. They include:

Treatment of the condition is cause-specific. For example, hormone replacement therapy for low testosterone levels or a change in medication if it’s caused by medication side effects.

So if you’re used to a sub-standard orgasm, then consider mixing it up. There are plenty of other ways for men to orgasm than through penile stimulation alone. There are also techniques for increasing the intensity of the male orgasm, including:

Before you resign yourself to a life of sub-par orgasms, give the above techniques a try!