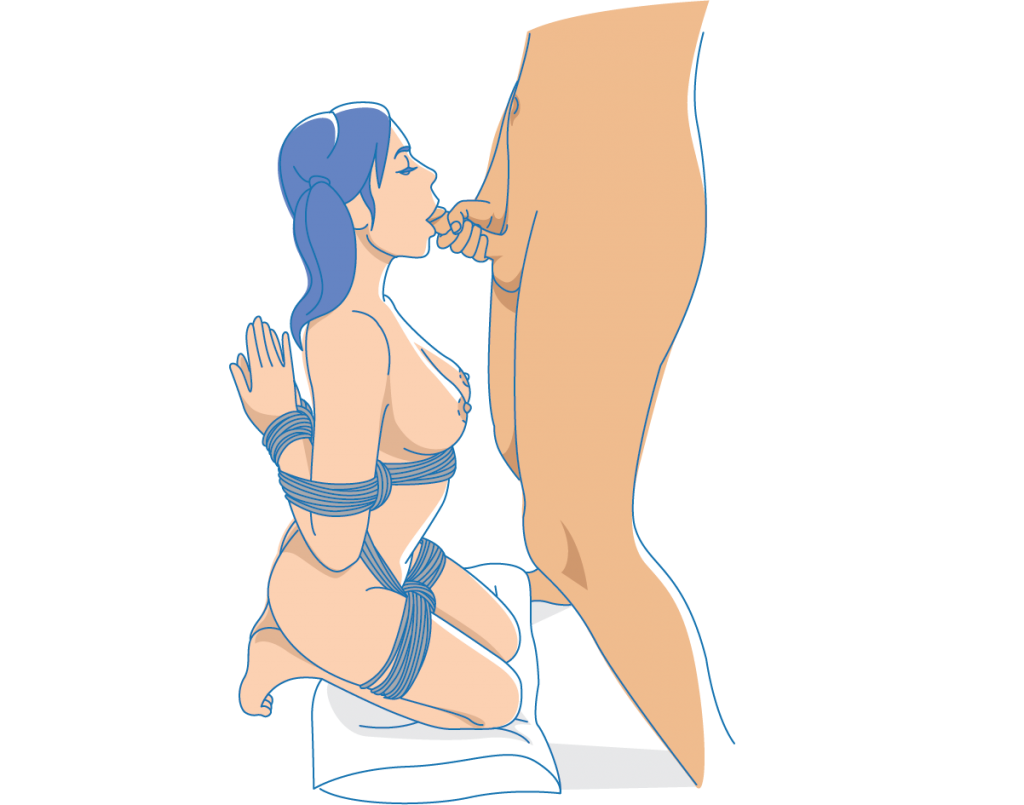 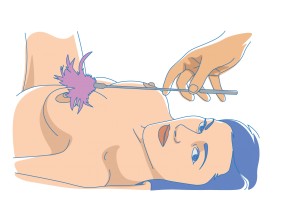 For now, just know that while all of these are separate kinks in their own right, there is some overlap between them. The thread that links them all together is that they all involve consensual power exchange practices. 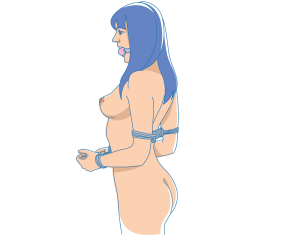 People who are into bondage enjoy a power dynamic in which one partner gives up control by allowing themselves to be tied up or physically restrained. Think ropes, handcuffs, and bondage suits. Discipline involves ‘training’ the submissive partner to behave in a certain way through verbal or physical punishments.

Together, bondage and discipline can be used to create a scene in which the submissive partner is completely at the mercy of the dominant partner. Giving up control like this is something a lot of subs find super hot.

There are different ‘levels’ of bondage depending on how serious you want to get. On the milder end of the scale, bondage can be as simple as pinning your partner’s arms down while you’re doing it.

On the more intense end of the scale, it might involve complicated rope ties, cages, suspension from ceiling hooks, or the ancient Japanese bondage practice and art form known as Shibari.

Warning: Bondage can be very dangerous if you don’t know what you’re doing. Tying up your partner runs the risk of restricting their blood flow, so be very careful to not use bonds that are too tight and do not do anything both of you aren’t comfortable and experienced with.

I’d recommend sticking to safer restraints like soft leather or velcro cuffs when you’re starting out, and make sure you have a pair of safety scissors to cut them away in emergencies.

The dominant partner is the one in control; the submissive partner willingly gives up control. Dominant guys are usually referred to as Doms while dominant women are Dommes. Submissive partners are called subs.

Note how ‘Doms/Dommes’ is capitalized while ‘subs’ isn’t. This is no accident. It represents an important concept in D/s relationships – that the Dom is the authoritative figure who commands a ‘higher’ status.

To create a D/s dynamic, Dominant partners can use various psychological and physical techniques to establish their control and authority. For example, they might tell the submissive what to do in the bedroom, or demand to be addressed as ‘Master’ or ‘Sir’.

Bonus fact: D/s relationships aren’t exclusively sexual in nature. Some couples like to maintain their D/s roles 24/7 even when they’re not having sex. In these instances, the D/s dynamic permeates every part of your life and relationship. 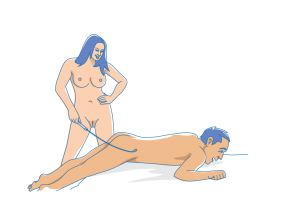 It’s often said that “there is no pleasure without pain”. Well, people into sadism and masochism take this quote super literally. Sadists get pleasure out of administering pain while masochists like experiencing it. You might also hear masochists referred to as painsluts.

People who are into S&M often enjoy impact play. Impact play refers to any sex act that involves a physical impact on the body (think spanking, slapping, whipping, etc.).

Sensory play is another type of S&M activity that involves sensory stimulation or deprivation. This includes activities like temperature play (think ice cubes on your nipples or dripping hot candle wax on your stomach), feather tickling, and pinwheels.

Note: Sadism & masochism is different from dominance and submission. D/s is more about control and doesn’t necessarily have to involve any physical pain, whereas sadism & masochism is specifically about pain. That being said, there is some overlap between the two. Sadists tend to act as the dominant partner in bed while masochists typically take on the role of the submissive partner.

And just as in acting, setting the scene involves making sure all parties understand the roles they’re going to be playing, choosing the right setting, and creating the right mood. 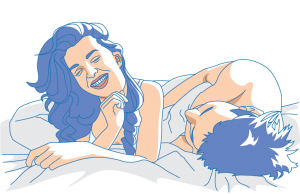 When the scene is over, it’s important to make time for some aftercare. Aftercare is the time you take after playtime is finished to check in with your partner and take care of their physical and emotional needs.

So, we need to take time to re-establish the ‘normal’ nature of our relationship after the scene is over, and that’s where aftercare comes in.

After you’re finished, check in with them to make sure they had fun, then reconnect on a more emotional (rather than sexual) level by reaffirming your love and respect for them.

Relaxing together, joking around, cuddling, and generally being kind are great ways to ‘get back to reality’ post-BDSM scene.

A safeword is vital as in certain scenes, it can be tricky to know whether someone legitimately wants to stop or they’re still roleplaying. If anyone says the safeword while you’re in the midst of a scene, that’s your queue to stop the scene and make sure they’re ok

Edgeplay pushes the boundaries of what you might reasonably consider to be safe/sane and consensual. As such, I’d recommend steering clear of edgeplay activities as a beginner. They’re risky, taboo, and controversial.

Figure Out What You’re Into

Here are some things to think about:

If you’re not sure what you’re into yet, the best way to figure it out is to experiment.

Talk to your partner

Once you know what makes you tick, it’s time to let your partner know that you want to explore that side of your sexuality. And that means having some explicit conversations.

If thus far, you’ve had a fairly vanilla sex life with your partner, the idea of bringing up something new can be intimidating. However, honesty and openness is the key to all successful relationships – so it’s time to bite the bullet and do it.

Don’t wait until you’re in bed to broach the topic as that’s likely to put your partner under a lot of pressure. Instead, suggest the idea in a less-pressured situation, like over dinner.

NEW: "Magic Finger Technique" Causes Even The Most 'Non-Orgasmic' Women To Shudder With Pleasure...

If you’re going to be tying your partner up, make sure you have some scissors nearby to cut their restraints in emergencies, as well as the keys to any handcuffs you might be using.

If you’re using impact play toys, try them out beforehand with your partner, starting with a very light impact so that your partner can figure out their pain tolerance and learn their limits. They get to decide where and how hard you can/can’t strike them.

You’ll also want to make sure both you and your partner know exactly what you’re going to be doing in the scene and that you’re aware of each other’s hard limits.

And finally, start small. You don’t want to jump in at the deep end and go straight into the hardcore stuff, you’ve got to ease into it. 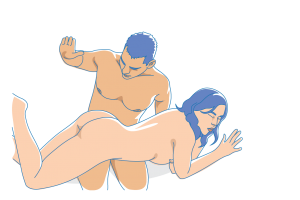 As a beginner, I’d recommend starting out by using your palm to spank their butt and then ramping things up from there.

Once using the palm of your hand starts to get old, you can graduate onto impact play toys like paddles. Certain household objects like rulers make great spanking toys too.

You can also experiment with spanking other parts of their body, aside from their butt. Some subs like to be spanked near their genitals as the vibrations in the muscles in that area can add to the sexual excitement. 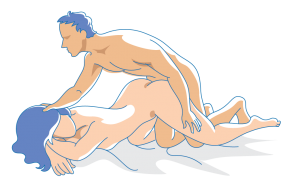 It’s best to start out light at first and pull gently. You don’t want to yank their hair out by accident. If you both like it, you can get a little rougher next time and be more aggressive with it.

Related: Prone Bone – Is This The Ultimate Sex Position?

Something as simple as changing the name you use to refer to your partner can do wonders to establish roles and set the scene. Here are some ideas:

Pick whichever honorific best aligns with your specific fantasies and pre-agree with your partner on referring to each other by those titles in bed.SEE

You can also try incorporating aggressive language by using words like ‘slut’ or ‘wimp’ to refer to your partner and set the scene. Expletives like ‘f*ck’ also work well. Check out our ultimate guide to dirty talk for more ideas. 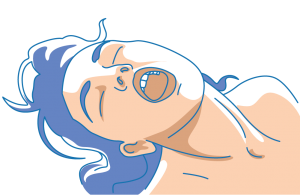 Orgasm control is when you repeatedly bring your partner right to the edge of climax and then stop before they orgasm.

Not only does it help to establish power roles, but it also heightens the pleasure by building up anticipation. When you finally let them cross the finish line, they’ll be so desperate for release that they’ll have a super intense orgasm. 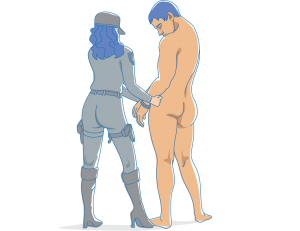 The right outfit will help you to really get in the mindset of the character you’re playing and create the right power dynamics.

For example, does the idea of being arrested and taken advantage of by a bad cop make you hot? If so, have your Dom throw on a police officer uniform and show you the ‘long arm of the law’. Or how about grabbing a stethoscope and lab coat and giving your patient a thorough examination?

7. Tying Each Other Up With Scarves

If you want to experiment with bondage, start out with a scarf before you invest in any bondage gear. Scarves are soft, safer than ropes, and you probably already have one lying around the house somewhere.

Warning: You still need to be very careful when using anything to tie up your partner. Be aware of risks to circulation & breathing and don’t tie anything too tight. Have a pair of scissors nearby for emergencies and make sure you can slip at least two fingers between the scarf and the skin. 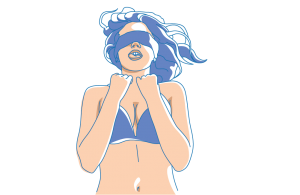 Blindfolding is a super simple, beginner-friendly way to spice up your sex life. Blindfolds add an element of anonymity and heighten sexual anticipation and suspense. They also force the wearer to surrender control which can help to create those all-important power roles.

Being unable to see also heightens all your other senses, which means physical feelings become even more intense. 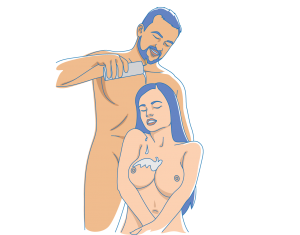 If you’re into S&M, a nice place to start is with temperature play. Things like candle wax and ice cubes can be used to start exploring pain in a safer way. Just make sure your partner is on board and do your research first to avoid injury – some types of wax burn hotter than others.

When you look at the part, you play the part. Throwing on some latex will really help you to transform into your new role and bring your scenes to life. Bondara’s fetish clothing section is full of hot options to choose from – check it out! 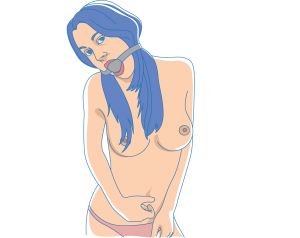 Ball gags can be used to silence the submissive when you want to take things up a notch. They can be a great playful way to punish the sub and force them to express themselves non-verbally.

Eye patches can be used for blindfolded play to amp up the sexual suspense and intensity. I’d recommend choosing a blackout blindfold made from a soft material like satin. 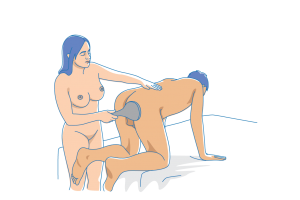